Mafia: Definitive Edition is out now, and we sincerely hope you enjoy living the life of a gangster as Tommy Angelo. But the next time you venture into Lost Heaven—whether through the main story, leisurely exploration in Free Ride mode, or perhaps a new playthrough on Classic Difficulty—take a moment to appreciate the finer details that solidify its atmosphere of 1930s America. Every game in the Mafia: Trilogy weaves historical accuracy into its distinct brand of crime drama, and Mafia: Definitive Edition is no exception.

"For Mafia: Definitive Edition, we had the original game to use as a reference, but we also did hundreds of hours of new research on everything from architecture and vehicles of the time period to historical events," says Hangar 13 President and CCO Haden Blackman. "We used whatever resources we could find for research—photos, books, films, the internet. How we used the reference material varied a bit by discipline, but it's all ultimately inspiration. For example, we didn't slavishly copy a photo of a car, but used it to inspire a new design that feels true to the time period but also uniquely our own." 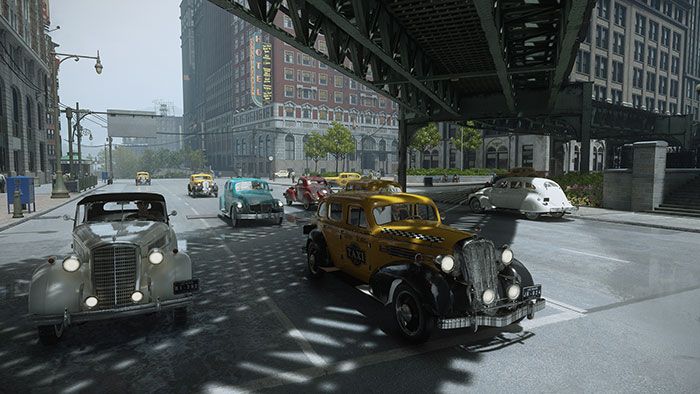 It's one thing to look the part, but there's a huge amount of unseen work that goes into making those period-authentic cars feel just right. "In all three Mafia: Trilogy games, how vehicles handle—their mass, center of gravity, top speed, and other variables—is heavily influenced by each game's specific era," explains Blackman.

Even the car radios in Mafia: Definitive Edition sound just right, mimicking the emerging technology of the 1930s. "Back then, radios all had valves or tubes, so when you turned the radio on, it actually took a while for the tubes to warm up, and the sound quality started out quite low," explains Matt Bauer, Studio Audio Director at Hangar 13. "So over a few seconds, the sound of a radio in Mafia: Definitive Edition actually starts out muffled, then gently comes to a higher level of fidelity. It's a very subtle thing, but it's something we do every time you turn the radio on." Once the radio's warmed up, you can enjoy a wide selection of popular songs from the era. "Selecting and securing all of the licensed music for these games was a massive undertaking, but critically important to establishing the authenticity," says Blackman.

Speaking of the radio, keep an ear out for some great bits of world-building via promotions for Lost Heaven's many commercial enterprises, like this Blue Heron Airlines advertisement promising sight-seeing getaways to Empire Bay. And when walking or driving by Lost Heaven's denizens, keep your ears perked to hear about 1930s 'current' events like President Franklin D. Roosevelt's New Deal, and slang terms like "Boondoggle" that simply don't exist in the modern lexicon, as explained in our Mafia: Definitive Edition Supporting Cast article. "Peppering the dialogue with these adds another layer of authenticity," says Blackman. "We also hired dialect coaches to ensure that we included the unique accents of the eras and locations across the Mafia: Trilogy. This was a lot of work for the actors, but ultimately very worthwhile." 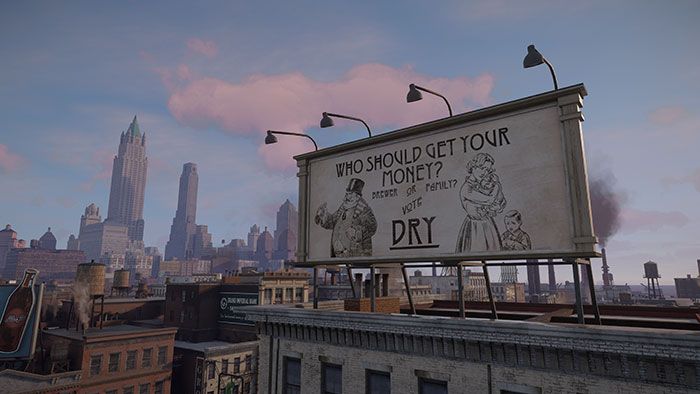 Click the image above to see what this same area looks like after the end of Prohibition.

If you've started Tommy Angelo's story, then you're already aware that his journey into the world of organized crime spans several years, stretching beyond the repealing of the 18th Amendment and Prohibition in 1933. That passage of time is reflected throughout Lost Heaven in a variety of subtle ways, though they may appear unmissable when you finally notice them. For instance, various billboards throughout Lost Heaven look remarkably different before and after the end of Prohibition; decrees that "Lost Heaven is voted dry" are replaced by bold beer ads, and you might see Swift Cola signs torn down to make way for Keron's Mount McKinley Canadian Whiskey. "Things like font choices and color palettes are very important, especially when used in set dressing," Blackman adds. You might also notice newer car models populating the roads over time, as Lost Heaven's automotive manufacturers continue to innovate and Ralph adds the latest and greatest to his garage.

There are many more period-authentic details to find on your own, like the Mafia: Definitive Edition collectibles featuring sensational covers from real-world pulp magazines. Stop and soak in your surroundings every so often during your next visit to Lost Heaven—you never know what little touch of authenticity you'll notice next.